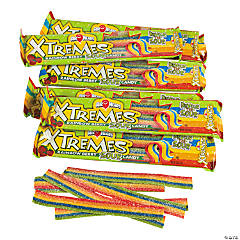 The History of Airheads

Airheads haven't been around as long as some of the other candy favorites we sell on our website, but they're a nationwide favorite. Created in 1985 by Van Melle Incorporated marketing director Steve Bruner, this candy has an interesting history.

Van Melle International was mostly known making Mentos, but in the mid-eighties they wanted to expand into different types of candy. When Airheads were originally developed they were sandwiched between sheets of rice paper, which was unusual for the time and made many consumers not like the candy.

It wasn't the inventor of Airheads who named them ¿ not directly, at any rate. Bruner approached his sons and asked them what kids called people who are silly, to which they responded, "airheads." In that moment, the new candy was named.

Though there are some flavors that come and go, the eight common flavors of Airheads are:

Though Bruner can boast inventing this fun candy, he receives no profit off the sales. He signed a contract with Van Melle Incorporated that gave up rights to anything he developed during his employment. In recent interviews, he's expressed no regrets and is proud to say his original sketch of the balloons is still featured on Airheads today.

How Much Airheads are Produced Daily?

Estimates are that around 3,000 pounds of Airheads taffy is produced every day. Now that's a lot of Airheads!

Airheads are an inexpensive candy that kids love receiving from trick-or-treating, tucked into party favor goody bags or in the classroom as a reward or prize. Buy Airheads in bulk to not only save money, but to be ready anytime with fun treats kids love!

We sell Airheads in bulk quantities as well as smaller quantities. It's also a good bet that we carry your favorite flavor, too! That chewy treat with the smiling balloon is a hit among kids and customers alike.